The Cherry Has Been Popped!

Finally, I have lived in California for over 4 years and I have never been to an L.A. Kings game…..until last night.

It wasn’t until about two years ago, when I met my friend Blessa, that I even knew what or who the Kings were. I had never met such a huge fan of the sport. She is the biggest supporter of Drew Doughty. How do I know? I had to hear about him at least 10 times a week! And as I began to make more friends in the area, I learned how much of a household name the Kings actually were and how many people were actually into hockey! See for me, back East it’s all about football. Sure, we have the Caps in the league, and a lot of my friends back home are huge Caps fans, but in my household, the only thing we watched was football; from as far back as I can remember.

So, it shouldn’t come as any surprise to you when I say, I sat in the Staples Center last night and had NO CLUE what the hell was going on! LOL. All I knew was that we were cheering for the Kings to get the puck in their goal, against the Vancouver Canucks. But I didn’t know what a Power Play was, I didn’t know about the penalty box, I didn’t understand the different areas they started a play from or the player positions…..I. KNEW. NOTHING! Half the time I felt like an old grandma because I couldn’t for the life of me see or keep up with the puck. It’s so small! I had been asked to go to games before or watch the games, but never did. I just couldn’t fathom sitting in a cold Staples Center wearing every item of clothing I owned to stay warm. That just didn’t sound appealing to me. Then I remembered all the times I sat in a cold stadium, OUTSIDE, to watch a football game. And I realized, it couldn’t be that bad; and it wasn’t.

As I sat there, I wished I had taken a second to at least read up about hockey beforehand because I felt like a fish out of water. But, I was able to feed off of the crowd, as you would in any sports arena where the fans are absolutely BANANAS!, and it was a wonderful experience that I hope to be a part of again! I will admit that the energy is not quite as insane as a football game, at least it wasn’t until the Kings scored (apparently this was a bad night for them as far as the excitement of the game, although they did win in OT!). But it was still fun to be in the crowd and watch the players get banged against the glass–that was my favorite part. Who knows, I may have found a new favorite sport. Something new to obsess over. Let’s feel out a few more games first before I go buying all the Kings paraphernalia!

If nothing else, other than the new hockey terms and lingo I learned, I had a great time with my friends. Just being able to hang out with them in a new setting was an experience all it’s own. Heather, Gabby and Tori…I love you guys to the moon and back and I am so glad we got to spend time together outside of work!

And might I just add……the L.A. Kings have some preeeetty HOT male fans….just throwing that out there….just saying.

Anywho….check out my pics from my latest adventure below!

From the Selfie Queen herself 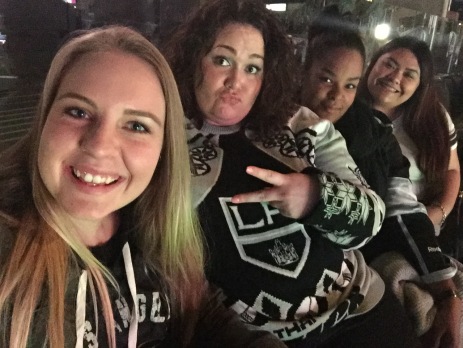 Take our picture yo!

Love her! Thanks for planning our fun adventure! 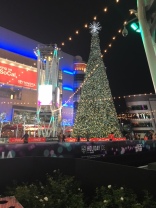 One of the most gorgeous Christmas Trees I’ve ever seen!

I love sharing new ideas and the crazy things that happen in my life. I'm a lover of all things; sunsets, puppies, makeup, fashion, travel, friends and family. I'm a wife to the most amazing man on the PLANET...hands down! And I have the best kid God could have ever blessed me with. But the best part of my journey is that, I love where I’ve been (Maryland-Cali-Vegas) and I'm looking forward to where I'm going! View all posts by TJ

This site uses Akismet to reduce spam. Learn how your comment data is processed.